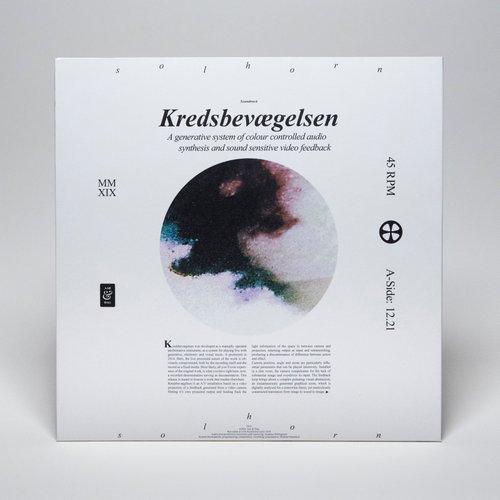 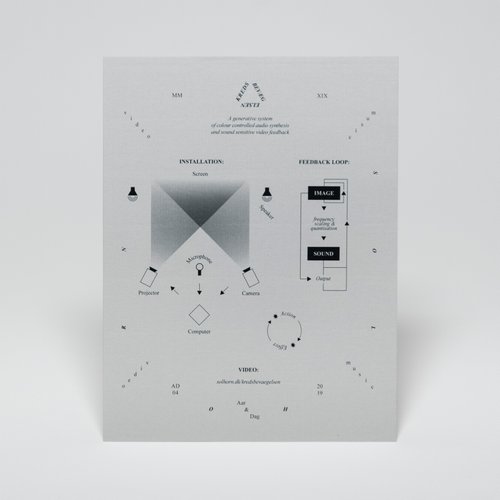 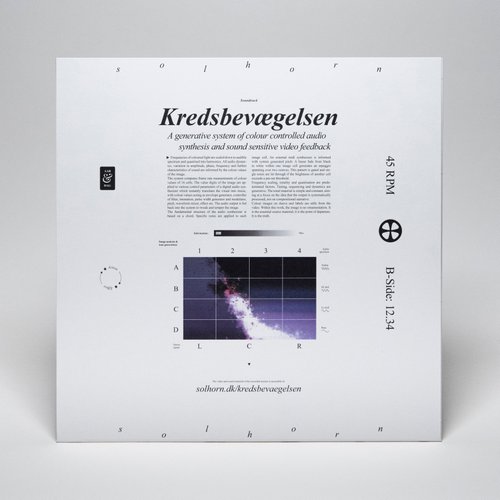 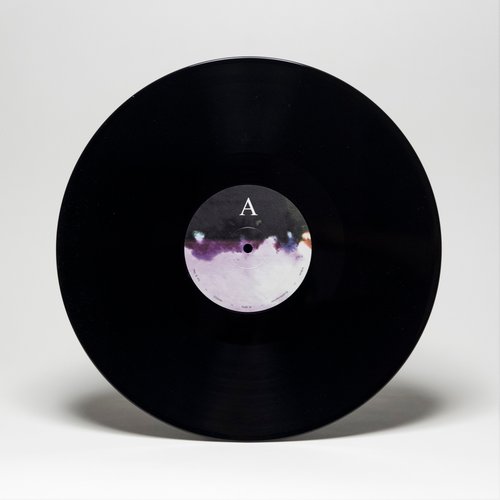 Kredsbevægelsen was developed as a manually operated performative instrument, as a system for playing live with generative, electronic and visual music. It premiered in 2014. Here, the live processed nature of the work is obviously compromised, both by the recording itself and the record as a fixed media. Most likely, all you’ll ever experience of the original work, is what you have right here, now, a recorded demonstration serving as documentation. This release is meant to honour a work that resides elsewhere.
Kredsbevægelsen is an A/V installation based on a video projection of a feedback generated from a video camera filming it’s own projected output and feeding back the light information of the space in between camera and projection, returning output as input and retransmitting, producing a discontinuance of difference between action and effect.
Camera position, angle and zoom are particularly influential parameters that can be played intuitively. Installed in a dim room, the camera compensates for the lack of substantial image and overdrives its input. The feedback loop brings about a complex pulsating visual abstraction, an instantaneously generated graphical score, which is digitally analysed for a somewhat direct, yet meticulously constructed translation from image to sound to image...
Frequencies of coloured light are scaled down to audible spectrum and quantised into harmonics. All audio dynamics, variation in amplitude, phase, frequency and further characteristics of sound are informed by the colour values of the image.
The system computes frame rate measurements of colour values of 16 cells. The value digits of the image are applied to various control parameters of a digital audio synthesizer which instantly translates the visual into music, with colour values acting as envelope generator, controller of filter, intonation, pulse width generator and modulator, pitch, waveform mixer, effect etc. The audio output is fed back into the system to tweak and temper the image.
The fundamental structure of the audio synthesizer is based on a chord. Specific notes are applied to each image cell. An external midi synthesizer is informed with system generated pitch: A linear fade from black to white with- in one image cell generates an arpeggio spanning over two octaves. This pattern is gated and single notes are let through if the brightness of another cell exceeds a pre-set threshold.
Frequency scaling, tonality and quantisation are predetermined factors. Timing, sequencing and dynamics are generative. The tonal material is simple and constant, aiming at a focus on the idea that the output is systematically processed, not on compositional narrative.
Colour images on sleeve and labels are stills from the video. Within this work, the image is no ornamentation. It is the essential source material; it is the point of departure. It is the truth.